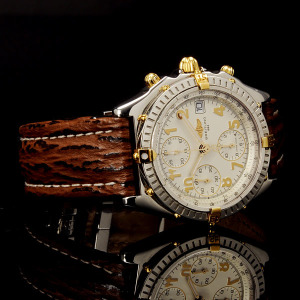 Any function on a watch that does more than indicate hours and minutes is called a complication. From the simple second hand to the most outrageous planetarium functions that indicate the position of the planets, watch complications run the gamut from useful and professional tools to luxurious testaments to a watchmaker’s mastery.

The first complication most would think of is a date display—a simple indicator of the day of the month. These displays are most commonly found in a “date window” at the three o’clock position on the watch face, usually in the form of two numbers, from zero to nine. Some watches, notably from A. Lange and Söhne, feature a “big date” display: a larger display of numerals below the twelve o’clock position, sometimes in two separate windows.

Other variations include a date wheel or ‘banker’s’ date, a center hand with an arrow indicating the date along the periphery of the dial, and a subsidiary dial, a small subdial indicator often found in conjunction with other complications. While this complication may seem simple, it proved tremendously difficult to produce, and original versions needed to be adjusted for months with less than 31 days.

The day-date complication adds the day of the week to the date display, most often below the 12 o’clock mark, or abbreviated alongside the display aperture at the 3 o’clock position.

A triple calendar complication simply adds the month of the year to the day-date display, and an annual calendar adds the year. These functions serve mostly as testaments to the prowess of the watchmaker and not much in the way of real world usefulness, at least until science brings us true time travel.

A perpetual calendar complication takes into account leap year, preventing the watch owner from having to reset the function manually on March 1st every four years. While perhaps not particularly practical, these watches feature incredibly intricate movements, with some gears turning multiple times a second and others turning once every four years. And as one might expect, these complex movements generally come with correspondingly high price tags.

GMT watches are a kind of dual-time watch named for Greenwich Mean Time, the traditional “0” point on the 24 hour scale of international time zones. These watches feature at least one time on a 24-hour scale, either with an independently adjustable 24 hour hand or with a fixed one. Traditionally, the 24 hour hand is set to GMT and the 12 hour hands to one’s ‘local’ time—other time zones are then calculated from GMT. In reality, users often set the two separate time zones to the most useful ones for their purposes.

World Time Zone watches display all the time zones in the world, and feature a 24-hour display on a rotating inner bezel that is part of the watch movement itself. An outer bezel, set by the user, lists major cities in the 24 time zones, and the inner bezel makes one full rotation in 24 hours.

A chronograph is a complication most easily understood by the layman as a stopwatch. Originally invented in the early 19th century as a tool for calibrating astronomical equipment, the chronograph quickly became a way to time horse races or any other time comparison event.

With the advent of aviation and the corresponding need for precise, repeated timing, chronographs became incredibly popular, and have been used in automobile racing, Olympic sports, and military applications. Perhaps the most famous use of a chronograph was by the Apollo 13 astronauts. They used their Omega Speedmaster’s chronographs to time a critical engine burn and successfully adjust their reentry trajectory when their on-board computers had failed.

A third type of chronograph, the rattrapante, is a split second chronograph that features two second-hands on the dial, one superimposed over the other. The rattrapante allows the user to measure two separate spans of time—while one hand moves, the other can be independently stopped, started, or reset.

Chronographs are probably the most useful of all the complications, whether it be for a doctor timing a patient’s pulse or a scuba diver timing a critical decompression stop. And with the introduction of a tachymeter, the chronograph became practically indispensable to early aviation. With a rotating bezel tachymeter, wrist chronographs could be used to easily and accurately calculate time, speed, and distance—the holy trinity of aeronautical navigation. Even with all of the sophisticated avionics in most aircraft, pilots today still rely on accurate chronographs. 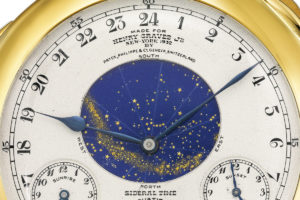 A minute repeater is a complication that causes the watch to chime out the time when a lever on the case is activated. Originally a mainstay in pocket watches, minute repeaters today are mainly prized by collectors. Other self-explanatory complications include ways to indicate moon phase, tides, and even the positions of the stars in the night sky.

Any watch featuring a number of complications can be considered a grand complication, though there is no official definition for the term. While Franck Muller’s Aeternitas Mega 4 can boast 36 complications, perhaps the most famous grand complication is the Henry Graves Supercomplication by Patek Philippe. At 24 complications, including a chart of the night sky set for the owner’s home in Manhattan, this pocket watch remains the most complicated watch ever produced without the aid of computer technology.

How much is such a timepiece worth? At a 2014 Sotheby’s auction, the Patek Philippe Supercomplication set a world record for auctioned timepieces, the final hammer price being an astounding $24,000,000—more than double its previous world record auction price of $11,000,000 set in 1999. 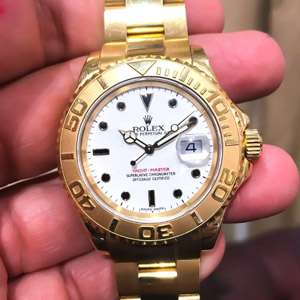 Read our five star watch buyer reviews and find out why we are rated the best place to sell your luxury watch for cash in Orange County and nationwide...

Orange County Watch Buyer is Orange County's premier buyer of high-end watches. When it comes to rare collectable watches, high-grade Swiss watches, and antique timepieces, we are both knowledgeable and pleased to provide valuations for you free of charge. Some of the more important names that we purchase from our clients in the Orange County are listed below.